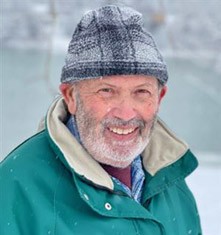 MORGANTOWN – When Democrats vote in West Virginia’s May 10 primary to choose a candidate for the newly created Second Congressional District seat, one of the candidates will be former two-tern Morgantown city councilman Barry Wendell.

The openly gay 72-year-old Wendell has been a resident of the Mountain State since 2012. He moved to West Virginia from Los Angeles when his husband, Rabbi Joseph Hample, was chosen to lead the Tree of Life Congregation in Morgantown. Wendell met Hample, a Harvard graduate, when the rabbi was studying at the Hebrew Union College in Los Angeles. They have been married since 2008.

When he lived in L.A.Wendell was active in the Jewish community and tutored for bar and bat mitzvah, the Jewish coming of age rituals for boy and girls and was a cantor during holy days.  He was twice elected to Morgantown’s city council, representing the Seventh Ward, winning his 2017 election with 60 percent of the vote and trouncing his opponent in 2019 with 73 percent. An improvement over his first attempt at elected office; he tried for the state House of Delegates in 2016 and came in last in the Democrat party’s primary.

Born and raised in Baltimore, Wendell earned a degree in humanistic studies at John Hopkins University and did graduate work in urban studies at Tulane University. Returning to Maryland’s largest city, he was a substitute teacher then an equal opportunity specialist for Maryland, as well as assistant deputy for the state’s food stamp program in Baltimore. Later Wendell took a job with the Social Security Administration in Miami and was promoted to Los Angeles; working as a bilingual claims representative before returning to substitute teaching. He worked in the L.A. school district for more than 18 years.

Wendell said he became politically active in 2015 after a proposal to change the West Virginian constitution was floated by two Delegates from his home county.

In 2015, House Resolution 99 asked the U.S. government to propose a constitutional amendment “that defines and limits marriage to a union between one man and one woman.” Two Monongalia County delegates cosponsored it and I ran for delegate in 2016, hoping to unseat one of them. I placed eighth of eight candidates in the Democratic primary,” he told The INNformer.

When asked if he would identify himself as a liberal, Wendell responded: “I guess I would, if you want a label.” He said he is most proud of the fact that during his tenure on the city council they all came together ending the factional bickering that had marked previous councils.

“We all worked together and the seven of us on council were all on the same page,” he explained. “We worked on fixing roads and hired more people for the police and fire departments.” He also noted he supported the council’s unanimous decision to promote the Paris Climate Accord and the council’s work on reducing energy usage by the municipality.

He is also proud of the council’s efforts to improve quality of life issues, such as the renovation of downtown’s Hazel Uby McQuain Park, and developing new walking paths and bike lanes. He also voted in favor of the tax breaks for the $5 million renovation of the historic Hotel Morgan. The renovation of the 97-year- old building, which reopened last year, was just part of the $26 million invested in the university town’s downtown over the past five years.

In elected to Congress, Wendell pledged he would work to get more money for West Virginia through the administration’s Build Back Better plan. “I will work to get the child care tax credit back and will raise taxes on coal to make sure that the Black Lung Disability Trust Fund is solvent,” he said. “I also support raising the minimum wage to at least $15, maybe even $20 per hour,” he said.

Also he supports enhancing Medicare to improve vision and dental care. “It can be paid for by getting rid of [former President Donald] Trump’s tax cuts and imposing a minimum tax on corporations and close loop holes in the tax code,” he said.

When asked what his chances are for winning the congressional seat, Wendell responded: “I am Jewish and believe that miracles happen everyday.”

Be the first to comment on "Barry Lee Wendell, D, Morgantown"