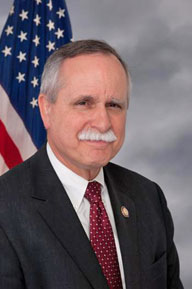 WHEELING - For Rep. David McKinley, the congressman whose district includes Tyler and Wetzel counties, getting out and meeting people to hear their concerns has been one of the more rewarding parts of representing West Virginia’s first congressional district over the past 10 years.

“What has given me the most pleasure over the past 10 years has been conducting over 3,000 meetings in the district,” said McKinley, 74, who is running for re-election in the newly created Second District. “Whether it’s meeting with seniors or businessmen, that’s what has given me more satisfaction that anything else. Giving people a voice. Focusing on people and listening to what’s on their mind and showing that representative government can work.”

After giving an example of where he recently took action after business leaders expressed their concerns over pending administration rules that would have placed restrictions on CDLs, McKinley said: “There are countless numbers of examples of good legislation that came out of these meetings.”

“People have got to know that we are not special people,” McKinley told The INNformer. An engineer by trade with almost 50 years in the business, McKinley said – like congressmen, engineers have to listen to what on their client’s mind and realize that they want to see progress.

“I want to make sure that people have a voice, which is why I have been in Tyler County over 70 times in the past 10 years. I want people to know that I am caring and listening.”

Looking forward, beyond the primary and general elections, McKinley said his seniority in the House of Representatives will become incredibly more useful to his district and West Virginia. “If history is right, and the polls are right, the House will flip to the Republicans. If that happens I will be the chair of one or two key subcommittees in Energy & Commerce.”

As a seventh generation West Virginian, McKinley said he understands how important it is to be an effective representative for the Mountain State in Washington. Pointing out that Vanderbilt University ranks him as one of the most effective members in Congress, McKinley explained he voted for the recently passed Infrastructure bill because it will bring much-needed funding to West Virginia.

‘We are getting things done for West Virginia. Will people appreciate the long- and short-term impact of the Infrastructure Bill?” he asked. “It will bring $6 billion that will help fix potholes, widen WV Route 2, complete Corridor H and expand Broadband.”

In January it was announced $1.7 billion from the legislation was earmarked for the Appalachian Development Highway System with more that $37 million going to the Corridor H project, which, when completed, will connect 1-79 and I-81 along US 33.

“Finally completing Corridor H is an overdue step to connect West Virginia to the rest of the region and will improve the quality of life for families, bring in new jobs and strengthen tourism,” McKinley said in a press release. “We know that businesses looking to make an investment in a state expect safe roads and bridges, clean water and reliable broadband. The $6 billion in infrastructure funding coming to West Virginia is a once in a lifetime opportunity to modernize hard infrastructure and ensure our state remains competitive for future economic opportunities. This funding for the Appalachian Development Highway System is an important down payment toward that.”

During the interview with The INNformer, McKinkley also pointed out that West Virginia’s infrastructure is currently ranked worst in the nation. “If your son or daughter brought home a report card with Ds and Fs on it, wouldn’t you do something about it?” he asked rhetorically. “When I finally had a chance to vote on it, I did – wouldn’t you want it?

“That’s an enormous amount of money that we otherwise wouldn’t have,” he said.

Saying he has a good working relationship with Gov. Jim Justice and voted with the Trump Administration 92 percent of the time, McKinley said he knows conservative values and is looking for results for West Virginia.

Recognizing a lot of young people have left the state to find good-paying jobs elsewhere, McKinley said it’s time to provide a better quality of life and focus on workforce training and an emphasis of vocational education in the schools to prepare the next generation of West Virginians to enter the workforce.

Touching on the controversial Jan. 6 Commission, McKinley stated: “There is a circus going on in Washington and I voted against it.” He said he voted for a bipartisan effort that would have been purely non-partisan, with five members appointed by the Republicans and five by the Democrats – none of which would have been a member of Congress. It would have also required a majority of the members to agree before issuing subpoenas. The proposed committee, similar to the one set up after Sept. 11, was to have explored the conditions and causes of the events that occurred Jan. 6 and would have ended last year, but the measure died in the Senate, he explained.

“This commission? I voted against it,” McKinley said. “Pelosi turned around and the majority party took the partisan approach. They are issuing subpoenas and there is no termination date. There were two votes and this thing is a partisan circus.”

As Paul Harvey used to say: “Now you know the rest of the story,” he concluded.

Er, where do I vote?

Be the first to comment on "* David B. McKinley, R, Wheeling"