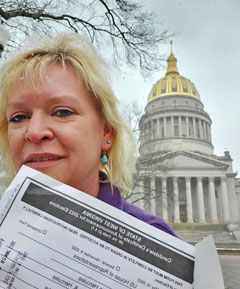 WHEELING – The thought of taking on two sitting congressmen in the Republican primary in the newly created Second District doesn’t seem to phase Rhonda Hercules one darn bit.

“I am a patriot, absolutely,” the 54-year-old mother of one from Wheeling exclaimed. “I am not intimidated by titles and tiaras – and we can’t be because that is exactly what we must defeat. I don’t buy into those titles and those tiaras because they don’t mean a thing.

“I am qualified and I know I can do better. Much better. A government run by lawyers and elites? How’s that been workin’ for ya?” she asked rhetorically. Echoing a message that has gained traction over the past few years, she stated in a recent interview with The INNformer: “What needs to be done for this country, and for the world, is something that only we, the people, can accomplish.”

Believing in the concept of a “citizen legislator” and expressing her frustration over the current political climate in Washington, Hercules said she decided to throw her hat in the ring when it appeared that only Representatives McKinley and Mooney were running in the Republican primary. “I think that every last one of them needs to go, right down to the janitor.”

While this is her first campaign, Hercules said she holds strong political beliefs and has been an activist on constitutional issues. She recently served a Writ of Mandamus on Gov Jim Justice, that he honor his oath to uphold the Constitution, Hercules said. She also noted she has served as district captain for the Convention of States Project. That organization is a national effort to call for a Constitutional Convention under Article V of the U.S. Constitution, restricted to proposing amendments that will impose fiscal restraints on the federal government, limit its power and jurisdiction and impose term limits on its officials and members of Congress.

Saying she participated in the Jan. 6 rally in Washington, she took a swipe at Rep. David McKinley, who was one of just 35 Republican congressmen who voted for the Jan. 6 Commission, by saying: “Anyone who is not talking about election fraud needs to go.”

Born in Wheeling, Hercules was one of seven children. She has six half brothers and sisters and has an adopted brother and sister who are of Mexican descent. She was graduated from Brooke High School in Wellsburg, Brooke County, in 1986 before attending classes at West Liberty.

“I paid for everything myself and ran a small business, a bar and restaurant, while taking classes in biology, chemistry and medical lab technology. I have about 150 credit hours but I went to college for an education, not a career,” she said. She also started raising and training horses on a 170-acre farm where she and her husband engage in small-scale farming where they have some corn, hay and raise beef cattle. “I’m a crazy horse girl,” she said with a laugh. Hercules has been married since 1992 and has a 25-year-old son.

“Honest and intelligent Americans need to step up,” she said, expressing her belief that many of the elected representatives are not doing their jobs. “Most are not making their own decisions, not writing the bills, not reading the bills and are being told how to vote. They are basically worthless.”

Noting tat she is using money from her savings to run for office and pledging to run a grassroots campaign that will only accept small donations from people, she said: “We need to stop with the apathy. It’s time to take the government back. Real people can do a better job, now it’s just about the money and it doesn’t take a million dollars to run.”

An executive secretary at the operations center for Ohio County Schools, the recently elected president of the volunteer board of the Ohio County Public Schools Federal Credit Union and the secretary of the Brooke County Republican Executive Committee, Hercules said, for her, the main issues the country faces are the loss of freedoms and that the Constitution needs to be restored.

“There has been a lot of unconstitutional things going on and if it continues, we will fall to communism or worse. There needs to be accountability, truth about the pandemic, and its origins, and truth about the election,” she lamented.

“We also need to rein in big tech and we have to have an internet bill of rights. In the 20th Century we were the consumer, in the 21st Century we will be the consumed.”

When asked how she defined herself politically, Hercules said she doesn’t like labels because “you can always pick one or two things out of a platform that you disagree with.” Although a lifelong Republican, she said she has never voted the straight ticket.

An opponent of free trade, Hercules said she believes in enacting tariffs to bring back industry and jobs. “Making our own steel is a matter of national security. I think we should be self-sufficient in all things and we especially have to make our own pharmaceuticals.” ­

Be the first to comment on "Rhonda A. Hercules, R, Wheeling"